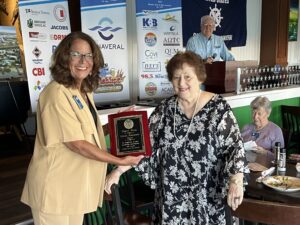 Siegrid Dixon, a two-term Past President of the Propeller Club of Port Canaveral and long time Board Member,  was recognized with a Lifetime Achievement Award at the October Luncheon.  Siegrid  contributed to growing the club membership in the early years and recruited many area maritime and community  leaders to join the Board.  She worked in the Maritime Industry with Premier Cruise Lines and at the Canaveral Port Authority.   She was a strong advocate for the creation of the HELM Maritime studies program and the Scholarship program.  Congratulations to Siegrid on her many years of dedication to the club! 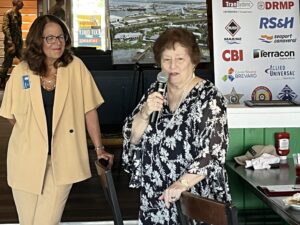 Benefits of Propeller Club Membership
We are a local chapter of the International Propeller Club of the United States, a business network dedicated to the promotion of the maritime industry, commerce, and global trade. Our club brings together the Port Canaveral and Central Florida maritime community by holding monthly luncheons that feature guest speakers. Three months of the year, April, July, and December, we hold special events instead of the luncheon.  We also hold networking Happy Hour events during the year. 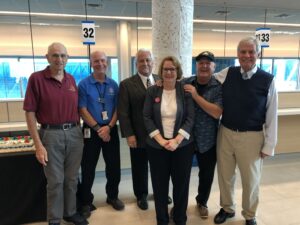 NEXT EVENT
NOVEMBER ANNUAL MEETING AND VETERAN’S LUNCHEON
The club’s annual meeting and Veteran’s Day Luncheon was postponed due to Hurricane Nicole is now being held on Wednesday, November 30 at Fishlips Waterfront Bar & Grill at 11:30 am!  The luncheon will immediately follow Canaveral Port Authority CEO Capt. John Murray’s Annual State of the Port to be held at Cruise Terminal 1 at 10:30 am.  If you already registered online and still plan to come no need to re-register.  If you can no longer attend please let the club know at propellerclubcanaveral@gmail.com.  November Annual Meeting
HOLIDAY PARTY
Join us for some Holiday Cheer at Zarella’s Italian restaurant in Cape Canaveral on Wednesday, December 7 from 6 to 10 pm.  We will collect donations for the Canaveral Port Ministry, both cash, check, and/or items for their gift boxes that they give to visiting seafarers during the season.  Register online here:  2022 Holiday Party
PROPELLER CLUB OF PORT CANAVERAL 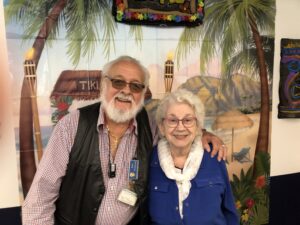 The Propeller Club of Port Canaveral has named Kurt and Norma Ronstrom as Maritime Persons of the Year for 2022.  Kurt is a Charter Member of the Propeller Club of Port Canaveral, a Past President and is also Past President and longtime member of the Navy League, Cape Canaveral Council.  Norma has worked side by side with Kurt volunteering with these organizations and working at their businesses.  The couple met in Miami and were married in 1959.  Kurt was born on the island of Gotland, Sweden and ran away to sea at the age of sixteen, eventually becoming a Marine Engineer aboard Swedish cargo vessels.  He served in the Swedish Navy for 1 ½ years.  Norma was born in Bradford PA.  and after college at Edinboro State Teacher’s College, the Cleveland Institute of Art, and Western Reserve University, she moved to Hollywood, Florida and worked for Southern Bell.  After they were married Kurt was drafted and served 2 years in the U.S. Army.  He became a U.S. citizen in 1961.  Together they raised four children and are proud grandparents and great grandparents!

Kurt founded KMD Ship Repair, Inc. in Miami and later relocated to Port Canaveral.  He did ship repair work on a variety of vessels, especially Navy vessels and cruise ships.  When he lived in Miami he helped found the Seafarer’s Ministry and later was involved in starting the Seafarer’s Ministry at Port Canaveral.  He is well known for his many years of cooking lunches for visiting Seafarers at the Canaveral Port Ministry about once every three months with support from the Navy League and the Propeller Club.  Kurt instituted and has led the Port Canaveral Maritime Day commemoration for twenty years beginning in May of 2001, again with the support of the Navy League and the Propeller Club.  Norma was instrumental in managing and planning events for these non-profit organizations and in KMD business operations.  In addition, she has volunteered extensively playing the piano at Church services including for over 20 years with the Salvation Army.  At one time she was playing the piano at three different churches every Sunday.

Together Kurt and Norma have had a tremendous impact on bringing together the Maritime Community in the Port Canaveral area and beyond through their many years of dedicated service especially in their efforts with Seafarer Ministries and in making sure that Merchant Mariners and the Maritime industry receive due recognition and honor.  The Propeller Club of Port Canaveral is proud to honor them as Maritime Persons of the Year for 2022 and to give them well deserved recognition for a lifetime of service.

2023 MEMBERSHIP CAMPAIGN
We are kicking off our 2023 Membership Campaign  and invite all of our current Members and Partners to renew for 2023 and all of our friends and interested community members to join us as new Members of Partners.  All who renew or join prior to January 1, 2023 will receive a 10% discount on dues.  Payment may be made by credit card or paypal on the online registration site or send in a check to P.O. Box 501, Cape Canaveral, FL 32920. Register online at this link:  2023 Early Bird Registration.

ROCKLEDGE HIGH SCHOOL HELM MARITIME PROGRAM FIELD TRIPS TO PORT CANAVERAL
Thank you to the Field Trip Partners for providing outstanding opportunities for the RHS HELM Maritime students to learn about all the different aspects of the maritime industry at Port Canaveral, October 4 and 5, and especially about the career opportunities available!
On Tuesday our Maritime 2 students learned about boat operations with BCSO, Canaveral Fire Rescue, Canaveral Pilots, and the USCG and some had the opportunity to take the wheel of the boats and drive! They followed that with a tour of an active marine construction site with Jacobs Engineering and Rush Marine where they got to see crane operations, pile driving and more at the NCP 3 project! Our Maritime 3/4 students had a visit to the ASI facilities at the port where they observed the active cargo operations of a ship being unloaded and toured the warehouse facilities. They followed that with the group splitting between visits to the American Cruise Aid Free Trade Zone facility and the Avalon Wheeler Freight Services warehouse. These opportunities will fit in perfectly as they begin course work towards Certified Logistics Associate. Now they can apply their real world experience to what they will learn in the classroom.
On Wednesday our Maritime 1 students visited Coast Guard Station Canaveral where they learned about the many Coast Guard missions, toured vessels and participated in activities such as operating pumps. Coast Guard recruiters were on hand to highlight career opportunities! They also took a Harbor Tour aboard the Blue Dolphin where they learned about the channels, basins, docks, and the different operations at the port including careers such as harbor pilots, tugboats, longshoreman, marine construction, terminal operations, port security, and more! As a bonus, they were treated to the Crew 5 rocket launch while at lunch at the CG Station pavilion and had a close up visit by dolphins while on the boat tour! It was a great two days for the students! 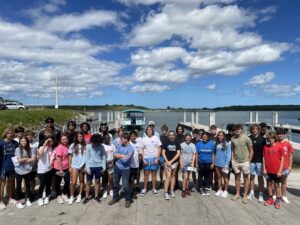 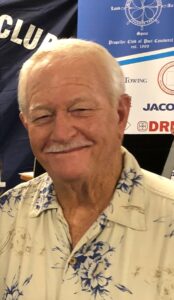 The Propeller Club of Port Canaveral has named Jack Crockett Member of the Year 2022.  Jack is a fifth generation Floridian raised in Brevard County and graduated from Cocoa High School in 1962.  He is a 1966 graduate of the Citadel.  Jack served six years in the U.S. Air Force including service in Viet Nam and at Patrick Air Force Base.  Following his military service, Jack embarked on a business career that took him to the Florida panhandle and back to Brevard County in businesses ranging from hotel management, banking, land development, and charter fishing boats.  Crockett Blvd in Merritt Island is named after him and he served as President of Crockett Groves on north Merritt Island.  For many years he was a force in local Democratic politics and he was instrumental in the passing of the TDC hotel tourist tax with the slogan “the tax you don’t pay”.

Jack joined the Propeller Club of Port Canaveral in 2005 and quickly took on leadership positions both at the local level and at the International level.  Jack served as President in 2010 and starting in 2012 served six years as Treasurer of the International Propeller Club.  He was instrumental in helping the IPC navigate some turbulent waters and helped bring the organization back on a steady course.  During his tenure on the International Board, he was dedicated to helping IPC improve administration and communication between HQ and the Ports.  He built strong relationships with club members across the state, country, and overseas.